Everyone is crazy about... Carnival! 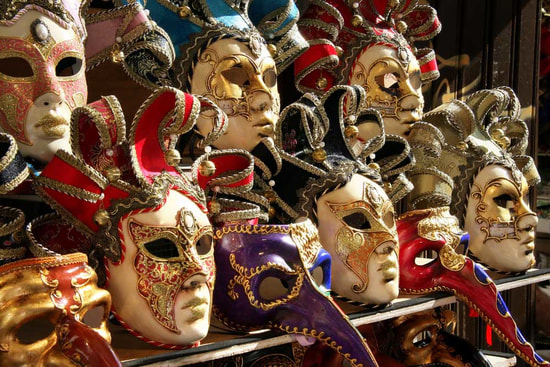 Photo: Shutterstock
It has always been an important part of Italian culture and costumes. The elders, the youngsters, everyone goes crazy about … Carnival! Close your eyes and let’s go together to the magic world of beauty, joy and pleasure.
Carnevale, also known as carnival or mardi gras, is a famous festival celebrated not only in Italy but as well in many other places all around the world forty days before Easter, with a final party before Ash Wednesday and restrictions of Lent.
Originally celebrated as pagan festivity, and as it is often the case with traditional festivals, the carnival was adapted to fit into the Catholic rituals. Usually carnival lasts for one day but in Venice, as well as in some other places in Italy, the Carnival celebrations may begin a couple weeks before.
The Venice Carnival is the most internationally known festival but as well one of the oldest. Its roots go back to the beginning of the 14th century but officially, the first edition of this congregation of masked people is traced in the 15th century.
It is said that the origins of the Venice Carnival lay in an victory of the “Repubblica della Serenissima “ (Venice’s name in that period) in the war against Ulrico, Patriarch of Aquileia, in 1162. In order to celebrate the important victory there were organized dances and parties in San Marco Square.  It was the unforgettable night, and how it was usual in those times, taking into consideration the multicultural character of Serenissima, magicians and other visitors joined the festivity.
In the following years the Venice Carnival was becoming more and more famous. Each year foreigners, including royalties, from all over the Europe were coming to enjoy the festivities while spending fortunes. During the festival there were numerous possibilities for having fun and especially for spending money, such as gambling dens, theatres, cafés, wine shops, both licensed and illegal, restaurants.
On the streets you could see people in masks, without possibility to distinguish nobility from the common people. Quite popular were masked couples, dressed as allegorical characters. In the squares street-artists and singers were entertaining locals and the guests of the Venice Carnival with their songs and guitar music.
When in 1797 Venice became part of the Austrian-held Kingdom of Lombardy-Venetia, after Napoleon signed the Treaty of Campo Formio, it fell into a decline which also contributed to a halt of Carnival celebrations for almost two centuries.  During fascism, in the 1930’s, the Carnival was even outlawed by the government. It was revived only in 1979.
Since 1980 the celebration of Carnival has become again very popular. People from every part of the world are coming to Venice to attend balls, dance all night long, or to get amused with theatrical performances organized for citizens and tourists.
The Venice Carnival cannot be imagined without masks, which are an important part of the festival. The first written document, mentioning the use of masks, goes back to the 13th century and it describes the practice of masked men throwing scented eggs at ladies and its prohibition by the council in 1268.
Venetian masks have a long history of protecting their wearer’s during promiscuous or decadent activities and have been worn since antiquity.  Made for centuries in Venice, these distinctive masks were formed from paper-mache and wildly decorated with fur, fabric, gems, or feathers and can be classified in two groups: Commedia dell’Arte masks and other masks.
Commedia dell’arte masks date back to the second half of the sixteenth century and represent characters, ethnic traditions, professions and trades closely tied to the different cities of Italy personified by professional actors in the Art of Comedy. It was a form of improvisational theater starting in 16th century and very popular until the 18th century, although it is still performed even today. The most important comedy personalities of that time, representing the basic characteristic of the period and the location in which they were created, that also have a political meaning, are: Pulcinella (Naples), Pantalone (Venice), Balanzone (Bologna), Brighella (Bergamo), Arlecchino (Bergamo), Colombina (Venice), Mamuthones In Mamoiada (Sardegna), Beppe Nappa (Sicily), Meneghino (Milan), Gianduia (Torino) and Stenterello (Florence).
Venetian Mask is the object, which most represents Venice, because it plays the Venetian spirit projected towards the party, the transgression and the amusement. There were many occasions when people turned to dressing up, in fact masks were worn many months of the year. In the 18th century, Venice enjoyed the reputation of having the most famous Carnival in the world.
There are various types of Venetian masks. The most popular is Bauta, which is was used as a device for hiding the wearer’s identity and social status, moreover, it permitted to act more freely in cases the wearer wanted to interact with others outside of bounds of everyday convention. It is also known with other names: Larva and Casanova.
Dama  represents many elegant variations of the ladies of the Cinquecento (the period of Titian) who covered themselves in jewels, expensive clothing and elaborate coifs. In our days this is probably the most beautiful mask type used during the Venetian Carnival. Famous as well with names: Liberty, Olga, Valeri, Salome, Fantasia and Regina.
Gatto (Cat in English) is a traditional Venetian Carnival mask. Cats were so scarce in Venice that they became the subject of one of the most typical masks.  Jester or Jolly as a female variant is a specific type of clown mostly associated with the Middle Ages. Starting in Italy, Jester moved into all of Europe, influencing theatre in Spain, Holland, Germany, Austria, England, and especially, France.
Moretta  is traditional oval mask of black velvet worn by Venetian women all year around,  usually during their visitit to convents. It was invented in France and rapidly became popular in Venice as it brought out the beauty of feminine features.

Other type is Volto (face in Italian), also known as the Citizen mask, because it was worn by the common people during all Holidays since ancient time.  Dottore Peste is a  a modern Venetian Carnival mask with a very unique history. One of the worst diseases for the city of Venice was without any doubt the Plague, which struck the city on several occasions. Because of this the Plague Doctor isn't a real mask but was a disguise used by local plague doctors who went on visits to people afflicted with plague wearing this strange costume. It is also known as Plague Doctor, Medico della Peste.
Nowadays, the Carnival of Venice is a charming folk festival and a unique event for its history, atmosphere and masks. During the two weeks of Carnival in this lagoon city, you can experience numerous parades, displays and events of all kinds but as well enjoy the taste of typical Carnival dishes.  The most popular and delicious are: frittelle,  castagnole, chiacchiere, zeppole, tortelli.
The Carnival frittelle recipe is known, with different variations, in many regions of Italy. What do we need to prepare them?

Wash the raisins and dry with a clean cloth. Dissolve the yeast in warm milk and melt the butter in a bain-marie. In a large bowl put 50g of sugar and knead with the eggs, add the melted butter, yeast, raisins, pine nuts, lemon zest and rum and stir until the dough is smooth. Slowly add the flour and a pinch of salt. Work the mixture vigorously and let it rest for an hour until it has doubled in volume. Heat the oil well and, using a spoon to give them shape, fry the Frittelle di Carnevale until they are puffed and golden. Drain on absorbent paper and serve sprinkled with the remaining sugar.
Castagnole recipe. We need:

Castagnole, a simple and delicious recipe for Carnival, are prepared in a very short time: in a bowl, soften the butter and incorporate sugar and eggs. Stir, add the grated peel of a lemon, a pinch of salt, flour and yeast. With a spoon, make balls the size of a walnut and fry in hot oil. As soon as the ball takes on a golden colour, drain on paper towels. Serve the Carnival castagnole with a dusting of icing sugar.
Chiacchiere recipe
1 lb all-purpose flour
1 ½ oz confectioners sugar
2 eggs
1 ½ oz butter
½ cup milk
1 tablespoon Grappa
1 pinch salt
1 pinch baking soda
vanilla powder (or vanilla extract) to taste
frying oil, as needed
1 tablespoon confectioners sugar


Pour out the flour onto a flat work surface. Make a hole in the center and add the other ingredients in the center, except for the milk. Gradually add the milk as you begin to knead the dough. Using your hands or an electric mixer, knead the dough until it is smooth, then cover in plastic wrap and let rest for 15 minutes. Then, divide the dough into pieces and roll out the dough until 1/10 inch using a rolling pin or pasta machine. Use a knife or pasta cutter to cut out diamonds or whatever shape you prefer. Fry the dough in boiling oil. The dough should be completely submerged in the oil for 30 seconds to 1 minute. Once golden, remove the fritters using a slotted spoon and place them on parchment paper. Dust the fritters with powdered sugar. The chiacchiere can be served immediately or stored for a couple of days.


Carnival. Mix of colors, sounds and tastes, masks and music that unite the past and present. Magic moments of happiness and joy, fun and crazyness. Carnival – gives you the opportunity to dream of being someone else. Carnival is a party. Celebration. The uniqueness that cannot be found somewhere else.  That and even more is just Italian Carnival.