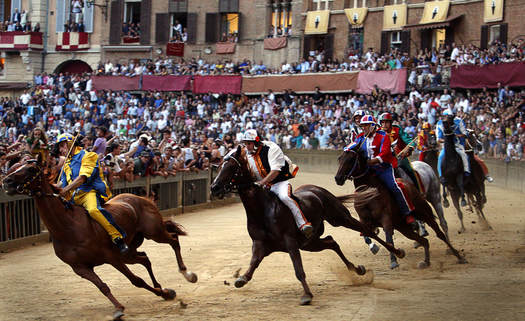 Source: Intoscana.it
When speaking about the Italian tradition, it is inevitable to mention the Siena’s Palio. Locally known simply as Palio, it is the famous horse race held twice a year in the city of Siena – on 2nd July and 16th August   On that occasion, ten horses and riders, bareback and dressed in the appropriate colors, represent ten of seventeen contrade or city wards.
As for the first time in the history, the race takes place on the “Piazza del Campo”, the heart of Siena. The Palio is run to celebrate the miraculous apparition of the Virgin Mary near the old Provenzano Salvani’s houses. That is why the apparition was called “Madonna of Provenzano”, in whose honor the very first Palio was run on 2nd July 1656. The second one was organized in 1701, on 16th August, in honor of the “Madonna dell’Assunta”, the patroness of town.
The origin of Palio is strictly connected with the birth of Contrade, districts into which the town is divided.  The Contrade are agonistic institutions with their own government, oratory, appellations, coat of arms, sometimes even titles of nobility, official representatives, festivities and patron Saints.
At the very beginning there were about fifty-nine Contrade. Today only seventeen remain, ten of which take part in the historical pageant and in the race at each Palio (seven by right and three drawn by lots).  Their names are:  Eagle, Snail, Wave, Panther, Forest, Tortoise, Owl, Unicorn, Shell, Tower, Ram, Caterpillar, Dragon, Giraffe, Porcupine, She-Wolf, Goose.
Every Contrada has its own and unique emblem and colors representing an area of Siena. When you walk through the city streets it is easy to recognize the Contrada you are in by observing emblems and flags. Quite often city corners designate the entrance in a different Contrada.
The Palio horse race is a very complex event that has changed a lot through the centuries. The event itself takes place over four days. The first day is designed for “Tratta”, or better the drawing of the lots and assignment of the horses to each of the Contrade.  Before the official race, that takes place on the last day, there are six trial runs or heats: one in the morning and one in the afternoon. The fifth trial, called “prova generale” or general trial, is on the evening of the third day. “Provaccia” or bad trial is taking place on the following morning. It is named by the little effort that jockeys put into the race because they don’t want to exhaust their horses excessively.
The race, the real and proper one, starts off in an area of the piazza, delimited by two long pieces of thick rope that is called “Mossa”.  The “Mossiere” calls the Contrade in the order they were drawn and checks that the assigned positions are respected. The first nine Contrade are placed in the area between the two ropes, while the last one enters the area at a running gallop in a sign of the race beginning.  Sometimes might happen that the start is not valid, and that is in the case that jockeys are not in their assigned spots. They are immediately warned by the shot to return into place. The starting phase is though more complicated as it seems because the place is small and the horses are so closes to each other.
However, if everything goes well, the horses have to run three laps around the Campo, managing to overcome dangerous points, as it is the narrow San Martino curve which was a cause of many falls in the past.  The first horse that crosses the finish line, no matter he might arrive without his jockey, is the winner of the race. The winning Contrada receives the Palio prize called “Drappellone” or large drape each year designed by a different artist that at the end of event remains in their museum. After the race is finished the winning Contrada members go to the Provenza church (in July) or to the Duomo (in August) for a prayer of thanks or “Te Deum”.
The last Palio took place this summer. The July race has been won by the Contrada Wave. Drappellone, the traditional prize was designed by the artist from Assisi Claudio Carli.  In August has won the contrada Ram, for the first time after their last victory in 1990. The prize was painted by Francesco Clemente.
The Palio is not a simple event in the everyday life of the Sienese.  It is a part of their DNA and their cultural identity. Every citizen belongs to one of contrade and participates in the organization of Palio with a lot of love and passion. If once in your life you get the chance to visit the Tuscany, come to Siena and enjoy one of the most spectacular horse races you have ever seen.